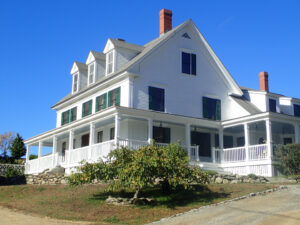 The Main House was built in the 1870s to please Edmund Sanborn’s fiancée Mary Yeaw from Rhode Island. It has even been said that its construction might have been a condition of their betrothal. The new house sits on the same foundation an older cape did. It is probable that it connected through the breezeway to the old carriage barn which in its turn was connected to the main barn. This connected architecture is firmly in the local tradition of “big house, little house, back house, barn”.

Technically the house is referred to as Colonial Greek Revival with its pronounced lintels over windows and doors and its decorative columns at the corners of the building and its gable end returns which encapsulate the entablature. Inside it is a fairly traditional four-over-four design with a center stair hall, although the newell post on the staircase is elaborate for a farmhouse. 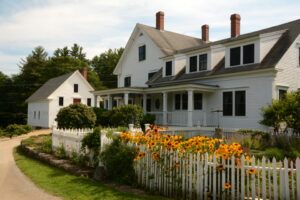