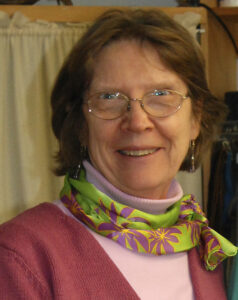 Lynn oversees the workshops and communications for Sanborn Mills Farm and is researching the expansion of the future educational programs.

Before coming to Sanborn Mills Farm (2014/2015), Lynn spent 31 years as an arts administrator and folklorist working for state arts agencies in Hawai`i and New Hampshire. The last five years of her time with the NH State Council on the Arts, she served as Acting Director. Over the years, she has researched and curated numerous exhibits and festival programs, published educational resources for schools, and administered traditional arts apprenticeship grants for the preservation of traditional crafts, dance, and music. In 1999, together with Dr. Betty Belanus, she co-curated New Hampshire’s presentation at the Smithsonian Folklife Festival and served as lead curator for the 2000 restaging at Hopkinton State Fairgrounds. She carried out a similar endeavor for the Hawai`i showcase in 1989 & 1990.

Lynn received her Masters Degree in Pacific Studies from the University of Hawai`i under scholarship from the East-West Center and a Bachelors Degree in Studio Art (ceramics & sculpture) with secondary art education certification from the University of Guam. Her early academic work was at Sophia University in Tokyo where she studied Oriental Art History and religions. She is active as a craftsperson having studied traditional ceramics in Japan and traditional fiber arts on the Pacific Islands of Guam, Yap, Belau, Ponhpei, Hawaii and Tahiti.  Her current work is in the area of Japanese surface design techniques.