The Ox Corner by Tim Huppe

Information on working effectively, efficiently and safely with oxen. 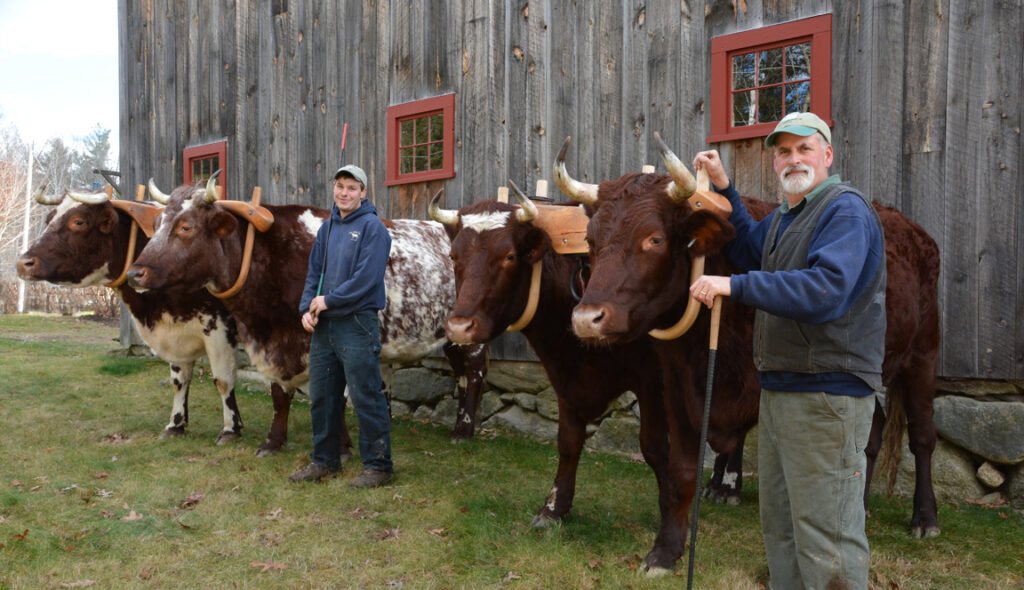 Cy and Don
A pair of knowing oxen by Tim Huppe

Every ox teamster has a list of famous oxen fixed in their memory. One such team for me was Les Barden’s, Durham oxen, Cy and Don.

At one time, and for many years, the University of New Hampshire kept a quality herd of registered Milking Shorthorns, also known to New England ox teamsters, as Durham’s. This name was given to them due to fact that Durham County, England was one of the northeastern counties in which the breed was developed and improved. As is the case even today, the Durham bull calves were in great demand by ox teamsters. The herdsmen at the University were fully aware of the demand for quality bull calves. I’m sure there was a list of buyers waiting for calves.

Cy and Don were born to big, rugged cows and were sired by the same bull. Their body type was what we refer to as old fashion. They had long bodies, deep and wide chests, and thick, straight legs. They were straight along the top of their backs and wide across the forehead. They had black hoofs (harder than white hoofs). Their color was dark red and they each had large stars on their foreheads. They were horned up alike. And if you were an experienced ox teamster, you chose cattle that had a hair whirl on the forehead above the level of the eyes (a sign of intelligence). And in addition they did not want cattle with black noses, however they would make exceptions for the right animal. Cy and Don had a high whirl and pink noses. Now, I know these last two requirements are considered superstitions, but the old teamsters put great stock in it.

Les was high energy, and so were Cy and Don. All three were generally at a fast walk. I did not drive the team until I was older and more experienced and they were as well.

During years before Les owned a bucket loader and a gutter cleaner for the barn, Cy and Don hauled the manure from the tie-up to the fields using a ground driven spreader. More than one old ox man told me that spreading manure is a courage builder for the oxen. Upon leaving the barn, the load is heavy. When you reach the field and engage the apron and beaters, the resistance is great. As the cattle tire, the load lightens, and the resistance becomes less. This builds their courage.

Les used Cy and Don to pull a disc harrow and to haul stone-boats loaded with stones picked from the tilled ground. Hitched to an ox cart, they hauled sawdust from a nearby portable sawmill site to the barn. And for a number of years they competed in the ox pulls at county fairs throughout New England.

The job that Les used the oxen for and enjoyed the most was to haul wood. Les had a long list of firewood customers as well as a contract to supply white birch bolt wood to a local turning mill. He cut the firewood to four foot lengths and split it in the woods. It was piled along the edge of the woods road. Eventually, it was hauled on a scoot pulled by the oxen to the home farm where it was restacked to dry. Once dry it was cut to stove length on a saw rig and delivered.  The bolt wood was cut to 52” and was sold as green, round wood. It was piled separately from the firewood. When three cords (the amount Les could fit on his truck) had been cut and stacked the cattle were brought in to forward the wood to the truck.

After morning milking and enough time had passed for the oxen to digest their breakfast, Cy and Don were yoked. The hinged wooden tailgate, of Les’ twenty- foot long truck body, was dropped down serving as a ramp for the oxen to walk up into the truck. The tailgates were made from hardwood planking. On the surface of the tailgate were 2” wide hardwood cleats running perpendicular to the planks and placed at approximately 8” on center. These cleats provided traction for man and beast when walking up and down the gate. If the tailgate was built as one solid unit, heavy spring, pulley, and cable systems were mounted on each side, making the lifting and lowering much easier. Les’ truck had two hinged tailgates, making them much lighter to handle and quite often this method did not require a spring assist system.

After climbing up into the truck, the yoked oxen would hang their heads over the four foot sides and turn to face the rear. The untied oxen would ride to the woodlot in this fashion.

Upon arrival, the split tailgates would be lowered and the team walked down. Then the tailgates were unhinged and set aside. Cy and Don were hooked to a logging scoot that had a cordwood rack mounted on top. They followed Les along the trail to the piles. The empty scoot was turned around, facing out of the woods. Les would drive the oxen up along the side of the pile and with the use of a pulp hook, the wood was loaded. Les would walk to the next pile and simply call the cattle forward. The loading continued until there was a half of a cord or more on the scoot. Once out to the truck, Les would throw as much wood as he could fit on to the rear of the truck body, then climb up and pile it forward. The process was repeated until the truck was fully loaded. A chain was bound across the middle of the load as well as the rear of the load.

Les drove the truck to the farm, and the cattle still yoked, walked home and waited at the hitching rail to be unyoked. They were groomed, then led to their stalls to be fed and watered. Les would deliver the pulp before afternoon chores.

On one memorable winter day when Les and the team were deep in the woods forwarding firewood, a fast traveling Nor’easter snowstorm caught them off guard and hit them with great intensity. Visibility dropped below twenty feet. Unhitching from the load, Les was able to guide the team out of the woods. Once in the field he grabbed on to the near ox’s bow and prompted them to head out toward home. He told me the blowing snow was so intense, that there were times when he could not see the openings in the stone walls they were passing through. Cy and Don made their way home without incident, with Les in tow, and stopped at the hitching rail.

I hope you readers now have an idea of what a ‘knowing pair’ of oxen are capable of.  These work partners are to be treated with respect and dignity and they will do the same for us.

A list of books focusing on the subject of oxen: 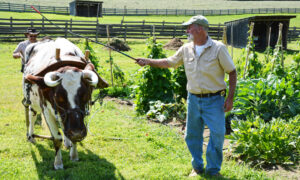 I am happy to introduce to our readers, The Ox Corner.  Included in each months SMF E-newsletter will be information that pertains to the care, the training, and the use of oxen. And occasionally, I will be sharing stories of my experiences using oxen, stories of teamsters and teams from my past, and of those which came before.  I invite you to read a piece I recently wrote, “I grew up on a small family farm in Farmington.”

What makes an ox?

Here are definitions from “Training The Teamster” by Les Barden.

Steer– A bull, which has been castrated, regardless of breed, size, age or reason. If a steer is not trained it remains a steer forever.

Clever Steer – A steer, which can be led and handled easily and safely. A clever human is ingenious. A clever draft animal is amiable and obliging.

Handy Steer – A steer, which has been trained to obey commands necessary to accomplish moving him from one place to another with only voice and/or stick command and with or without being yoked singly or doubly.

Working Steer – A handy steer that can accomplish tasks such as drawing loads.

Ox – An ox is a mature (full mouth) working steer. Maturity is recognized at about four or five years of age when the bovine attains a full set of front teeth. The word designates castration, maturity, and working ability. Ox is the only present-day word pluralized with “en.”

Here’s an additional definition that I use:

Working Cattle – This is the term given to heifers (a young female cow) and cows that have been trained to the yoke to accomplish tasks – or what I refer to as “meaningful work.”

Next month I will include a list of books focusing on the subject of oxen.