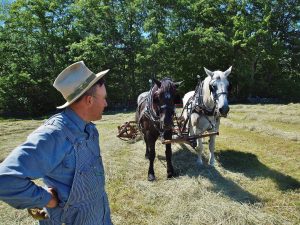 Lars getting ready to rake hay with Tulip (left) and Jenny. 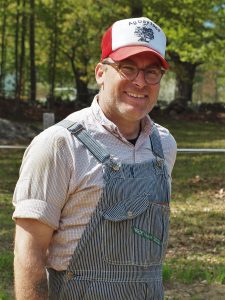 Lars Prillaman, along with his wife Leslie and their son Wendell, is the newest member of the Sanborn Mills Farm staff, joining us in early May from West Virginia. Already he’s become an indispensible member of the farm team, along with his beautiful Percheron draft horses, Tulip and Jenny. He’s also a terrific storyteller and all-round great guy, as you’ll see in our interview.

Sanborn Mills Farm: Were draft horses part of your childhood, or did your interest in working with draft animals come later?

Lars Prillaman: I grew up in Jefferson County, West Virginia. It’s the easternmost county in the state. If folks up here have ever heard of Harpers Ferry, John Brown’s Raid, or Shepherdstown, that’s where I’m from. My dad had a Percheron gelding when I was a kid and into my 20s. He had a little two-wheeled cart that he’d go bee-bopping around our village in. I drove Roy a bit, but we didn’t really do farm work with him. But he was certainly a source of inspiration to learn to farm with draft animals. When my wife and I began farming together in 2013, the idea that on our scale draft power could work wheedled its way into my brain. I don’t think that would have happened if I hadn’t gotten at least some time with a draft horse as a kid. Roy was a tremendous horse. I was a lucky kid.

Tell us a little about Jenny and Tulip. How long have you had them? What’s the history of their breed? What kind of work did you do with them in West Virginia?

Jenny and Tulip are both Percheron mares. They have very different histories but have grown into a terrific team. Jenny (grey)  came off an Amish farm in Pennsylvania. She’s done virtually any farm work you can think of in hitches as small as two horses and as large as eight. Tulip (black) had been a dressage/heavy hunter in the drill team world. Those are fancy horses ridden around in syncronized routines. They look awful pretty but are not really accomplishing anything of use. Probably a lot of fun, but not really my wheelhouse or focus. Tulip wasn’t what they wanted anymore, and thank goodness for that because she’s a brilliant and sweet gal who gives it everything she’s got. She got a bit of retraining and she’s been a great farm horse since. Absolutely my gain. The history (perhaps some mythology mixed in) of the Percheron breed is that they are the descendants of the horses bred to carry armor-clad men into medieval battle. There’s probably some truth to this. They are originally from France, in a region called La Perche. There is some speculation that their spirited nature and intelligence comes from breeding with Arabian horses brought when the Moors were overrunning Spain and France. I don’t know if that’s true, but it’s true they are spirited and intelligent (more so than me, some days!). Anyhow, I got both of them between 2016 and 2017. We worked about 2.5 acres of produce ground (plowing, discing, shaping beds), about 10 acres of hay field, manure spreading, and a number of other tasks when we were in West Virginia.

Is it difficult to learn how to work with draft animals? Oxen and horses are large creatures and might be even a little intimidating for beginners. What are the secrets to gaining the trust of these animals?

I would say that it will be difficult to learn with the wrong attitude, but patience and routine go a long way for both the team and the teamster. Horses are looking for leadership, but not a “master.” Approaching horses from the perspective of respect and partnership will help a horse learn to trust. There are no secrets. At least I certainly won’t keep any about horses! Anyone who says “the secret to horses is…” is spinning a yarn. And anyone who “knows it all” doesn’t actually know as much as they’d like you to think, or as much as they themselves think. Respect the horse as a partner, a thinking and feeling animal that is looking for your leadership and clear direction, and you’re starting to lay the ground work. There will be mistakes and setbacks for any teamster learning the craft, but the right attitude in those moments will keep someone from walking away from the joy this skill can bring when it gets tough. And it just gets tough sometimes.

What do you enjoy most about working with draft animals?

I think firstly what I enjoy most is the partnership that is built between a teamster and their horses. You can tell when trust is building and the relationship is beginning to gel.
Of course, the work I enjoy as well. I just like to work. I can’t sit idle. But with draft work, there’s nothing like the sound of the soil opening when you plow, or finishing a morning of cultivating crops and you’ve got visible tangible results of hard work right there. Even mowing hay, which is a little noisy, is enjoyable. Nothing smells better than fresh cut hay. Every second of it is an aesthetic sensory delight. Then there’s the metaphysical. It makes me feel connected to the soil, to Creation, to the generations of people who worked the land before us. Farming in this way solidifies for me who I am and how I fit into this world, a world and time I often have difficulty understanding. It gives me something definitive to stand on and do. And it is right to do. It is good work, stewardship, and care for what we’ve been given. As Wendell Berry says, “There are no unsacred places; there are only sacred places and desecrated places.” I am trying to keep the land I am to care for sacred.

Tell us a little about your family. You and Leslie named your young son Wendell, after writer/environmentalist/activist Wendell Berry – and I understand Mr. Berry knows this. Tell us about that experience.

Leslie and I have been farming together since 2013. She is a green thumb extraordinaire. I love working with livestock and so our interests really meshed well when we started our business. But things in West Virginia, and the Eastern Panhandle were changing rapidly and, from our perspective, for the worse. We were looking at moving to New England at some unknown point when the position at Sanborn Mills Farm was posted. I applied immediately and here we are.

We did indeed name our son after Wendell Berry. Wendell and the other folks at The Berry Center know this basically because I told them. Our son was born on a Friday morning at home and when we had decided his name, I sent the folks over there a quick note simply to let them know that another young farmer had joined us in this world and Wendell’s work being so meaningful to us, we had given him that name. Long story short, our son became ill two days after birth and was in three different hospitals and two intensive care units before being fully stabilized. He recovered from his illness in about a week and we were allowed to go home (the hospital that had the care he needed was about three hours from home). When we got there, a package awaited us from The Berry Center. They were aware of our trying and scary week and had sent along a few gifts, a few signed by Mr. Berry to young Wendell. We were deeply touched. A young fellow and his wife who are both at The Berry Center had had their first child only a few weeks before our little boy. We have been blessed with their friendship ever since. The gratitude we feel to be part of the Membership can not be conveyed. That’s a bit long winded I reckon, but that’s the story!

What’s your experience been like so far on Sanborn Mills Farm? Is it what you expected?

Sanborn Mills Farm has been a tremendous experience. Everyone is welcoming, helpful, generous, and humorous. It goes without saying that the landscape of the Farm is stunning, but how in love we would fall with this area, we couldn’t have guessed. One aspect that excites me every day, especially about the Farm crew, is how much good work is being done. Food is being grown in a sustainable and responsible way. I’m sure we will only increase the amount we are growing, and put it in the hands of the folks that need it most, all while doing the work in a way we can be deeply proud of. I’m blown away by what Sanborn Mills Farm already is, excited to see where it will go from here, and honored and humbled to be a part of it.