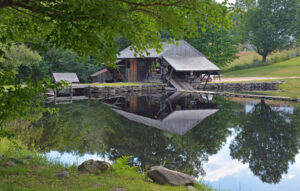 The saw mill and the saw mill dam were constructed in 1829 by Penacook, New Hampshire millwright Theodore Farnum Elliot for Edmund Sanborn. This “new” saw mill was built to replace an earlier saw mill (c.1777) that Edmund’s father John Sanborn had built (The History of Penacook, NH 1902 pp. 329-331). The 1829 mill was built using scribe-rule mortise and tenon construction, and may incorporate a few reused timbers from the earlier saw mill on the site. The mill is 21 feet wide by 53 feet long, with a frame built out of both hand-hewn and up-and-down sawn timbers.

Interestingly, the saw mill at Old Sturbridge Village, a recreation of the Colby-Nichols mill that was washed away by the great flood of 1936 in Bow, New Hampshire, has exactly the same dimensions and was also built (in 1834) by the same millwright. Originally built as a sash (or up-and-down) saw mill, our mill was converted to a circular saw mill in the 1870’s. The current Lane #1 saw was purchased and 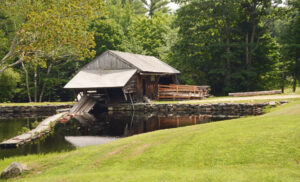 installed in 1891, having been shipped by rail from Montpelier, Vermont to Pittsfield, New Hampshire. The conversion of the mill required the addition of a log ramp with a continuous chain to pull the logs out of the pond onto the saw deck. This replaced the side access ramp which has been recently rebuilt in anticipation of the recreation of a small version of the up-and-down saw using parts from the original unearthed during work done to repair the saw mill dam.

The wooden vertical plank core of the saw mill dam had failed by 1997 and so the building was removed from its foundation to provide access to repair the dam. Permits were secured from the state to rebuild the dam and the entire dam was removed from the stream so that a modern concrete core could be anchored to the ledge below the stream bed. The last pour for the dam penstock was made on February 8, 2001. The dry stone wall faces of the dam were then relaid and the building was rebuilt on the new foundation using new hemlock timber for its understructure. The superstructure above the saw deck is original. The first use of the restored Lane #1 using water power was in September of 2006.

Some interesting statistics: the carriage for the Lane #1 saw is 36 feet long. Local legend has it that the longest timber ever produced by the mill was 42 feet long. The carriage for the up-and-down saw is 28 feet long, which is the maximum length that the original building could have held. The head for the current turbine is 12 feet, though we would like to have more. The 54 inch blade of the saw has 36 teeth and the saw turns at a maximum of 500 rpm. The 54 wooden teeth in the crown gear that transfers power from the vertical shaft rising from the turbine to the bevel gear on the horizontal drive shaft required 14 jigs to make.

Click on the images below to view images of the sawmill in operations.