Prior to building the Grist Mill at Sanborn Mills Farm in 1830, Theodore Farnum Elliot designed and built the Sawmill in 1829. An earlier sawmill, built in the 1770s, occupied the same location; the 1829 Sawmill replaced the older mill. The “new” mill utilized scribe-rule mortise-and-tenon construction, and the frame incorporates hand-hewn as well as up-and-down sawn timbers.

The original up-and-down saw was replaced in the 1870s with a more efficient water-driven circular saw. In 1891 the present circular saw, featuring a 36-foot-long carriage and built by the Lane Company in Montpelier, Vermont, was shipped by rail to Pittsfield, N.H., then transported by wagon to Sanborn Mills Farm.

Logs to be sawn into lumber are floated in the mill pond and pulled up into the Sawmill by chain. Water flow connected to gearing below the Sawmill dam establishes the speed of the saw; at maximum speed, the 54-inch, 50-tooth saw blade turns 650 times per minute. The speed of the carriage is controlled by a lever in the saw husk — the sawyer must not feed the carriage too fast or the saw will jam in the log and ruin the mechanism.

This building and its dam required a complete restoration in the 1990s. The saw deck and roof were moved in one piece so that the foundation could be completely rebuilt and the gearing floor and ceiling could be replaced by new timbers. The dam was improved with a concrete core that was then faced with dry-laid stone; this work was completed in February 2002.

Restored following a 10-year-long labor of love, the up-and-down saw once again cut logs into lumber beginning in August 2021. The Sawmill at Sanborn Mills Farm is, we believe, now the only water-powered sawmill in the United States with both an operational circular saw and operational up-and-down saw.

The Farm’s Sawmill now has a working water-powered Up and Down Saw in addition to our water-powered Circular Saw. We believe our Sawmill is the only water-powered sawmill in the United States with both types of saw in operation.

Up and down saws were the standard saw used to cut logs into lumber in American sawmills from the mid-17th century until the late 19th century, when more efficient circular saws, which were first patented in 1804 but did not come into wide use until later in the century, became popular. The first water-powered sawmill in what were then still the Colonies, built in Berwick, Maine, in 1634, featured an up and down saw. By 1840, there were more than 5,500 sawmills in New England, including the sawmill at Sanborn Mills Farm, and almost all of them used up and down sash saws like the one in this video.

Putting together the Up and Down Saw at the Farm was a 10-year labor of love. Missing parts needed to be found or, in some cases, made from scratch. Restoring the saw required the work of a skilled millwright. The job of millwright involves many disciplines.  First knowing how water works, then designing and building the various boxes, chutes, and gates that maximize the energy provided by the water, then creating all the moving parts: shafts, belts, pulleys, bearings, carriages, guides, cogs, gears, and various control mechanisms to hold things in place as the various machines do their work. We are very lucky to have caught the interest of Brian Clough, as he has a gift for dealing with wooden water-powered machines and well as having the metal-working, carpentry, timber framing, and rigging skills essential for assembling his creations.  Without his dedication and skill, neither the Farm’s grist mill or sawmill would be operating at the level they are now.

On August 27, 2021, the first log, a pine, passed through our Up and Down Saw, guided by Brian, and our sawmill once again sang with the rhythmic chant of the vertical blade as it had nearly two centuries earlier. 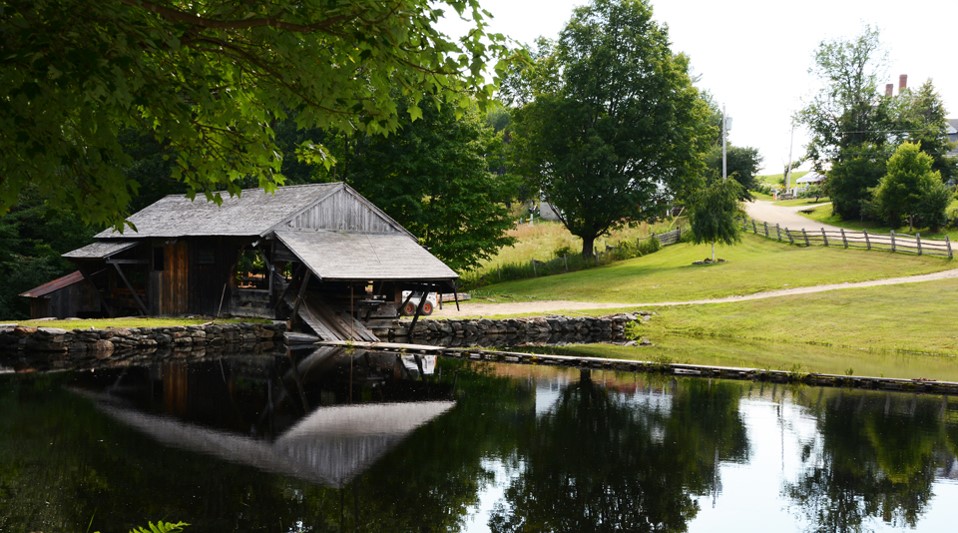 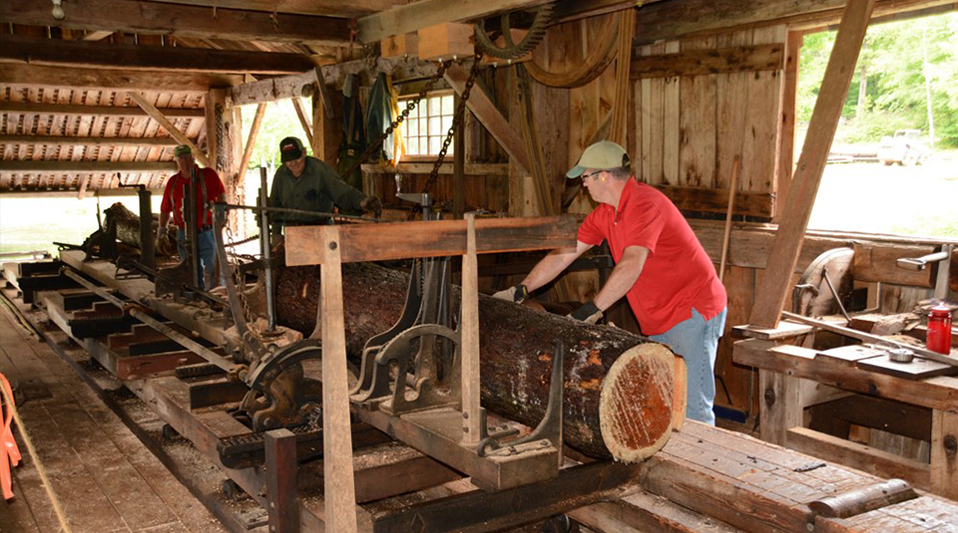